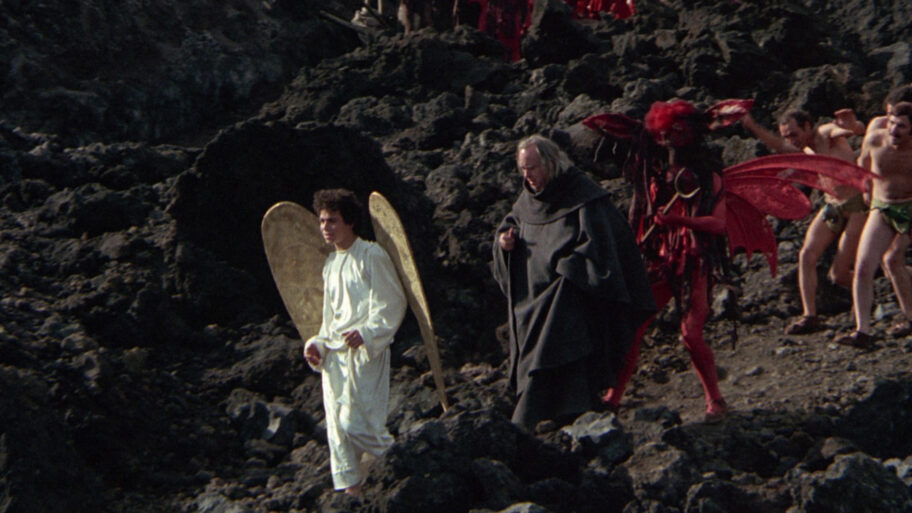 “Retains an enviable censor-baiting gusto, a protean ability to celebrate the body and its appetites, and can still shock with imperishable style.”

Winner of the Golden Bear at Berlin in 1972, Pasolini’s uproarious adaptation of The Canterbury Tales continues in much the same pagan vein as The Decameron (1971)—except that this time around the large, lewd canvas is perhaps even more salacious and scatological. Some felt that Pasolini’s preoccupation with bodily functions and the grotesque, culminating in a bizarre, Bosch-like vision of Satan’s anus, represented a ​“loss of confidence in the liberating powers of human sexuality” (Peter Bondanella). That said, this is still one riotously ribald ride at the movies, and one of its comic highlights has Chaucer (played by Pasolini) furtively cribbing from Boccaccio while writing The Canterbury Tales—a take on literary history that is not entirely inaccurate. Italian censors subjected the film to a series of seizures and prosecutions (for obscenity and ​“vilification of religion”). Pasolini was absolved in each instance. In English.

“Behind Pasolini’s ribald collection of ripe teenage backsides, golden-skinned ephebes, and naughty nuns lies a melancholy philosophy, in which the ephemeral joys of sex and love are inextricable from social power-brokering and street-level flimflam.” Ed Halter, Village Voice

“[A reminder of] the timeless appeal of a well-told dirty joke … A display of vitality, [with] an eye for period detail … it also contains one of cinema’s greatest flatulence gags ever.” Jason Anderson, Toronto Star

This free screening is presented as part of​“Cinema Thinks the World,” a partnership project between the University of British Columbia and The Cinematheque. After the film, there will be a short reception followed by a one-hour panel talk with audience discussion.

A singular figure in Italian cinema and society, the poet, novelist, critic, theorist, and essayist Pier Paolo Pasolini (1922–1975) was one of his country’s most distinctive filmmakers, most prominent intellectuals, and, throughout his career and even after his brutal death, most controversial artists. Our “Cinema Thinks the World” series, presented jointly with UBC, commemorates the auteur’s 100th anniversary with a complimentary screening of his outrageously raunchy medieval romp The Canterbury Tales—itself celebrating 50 years—followed by a panel discussion with Chaucer scholar Stephen Partridge and others.

Jon Beasley-Murray is an associate professor of Spanish, Department of French, Hispanic, and Italian Studies, at the University of British Columbia. He is the author of Posthegemony: Political Theory and Latin America (2010).

Ervin Malakaj is an assistant professor in German Studies, Department of Central, Eastern, and Northern European Studies, at the University of British Columbia. His scholarship in film studies includes research on melodrama, slapstick, queer aesthetics, and periodical culture.

Laura U. Marks is a media scholar, programmer, and professor at the School for the Contemporary Arts, Simon Fraser University. She is the author of numerous books, including Hanan al-Cinema: Affections for the Moving Image (2015) and the forthcoming The Fold: From Your Body to the Cosmos.

Stephen Partridge is an assistant professor in the Department of English Language and Literatures at the University of British Columbia. His areas of interest are Middle English manuscripts, authorship, and Chaucer. He has written extensively on, and teaches, The Canterbury Tales.