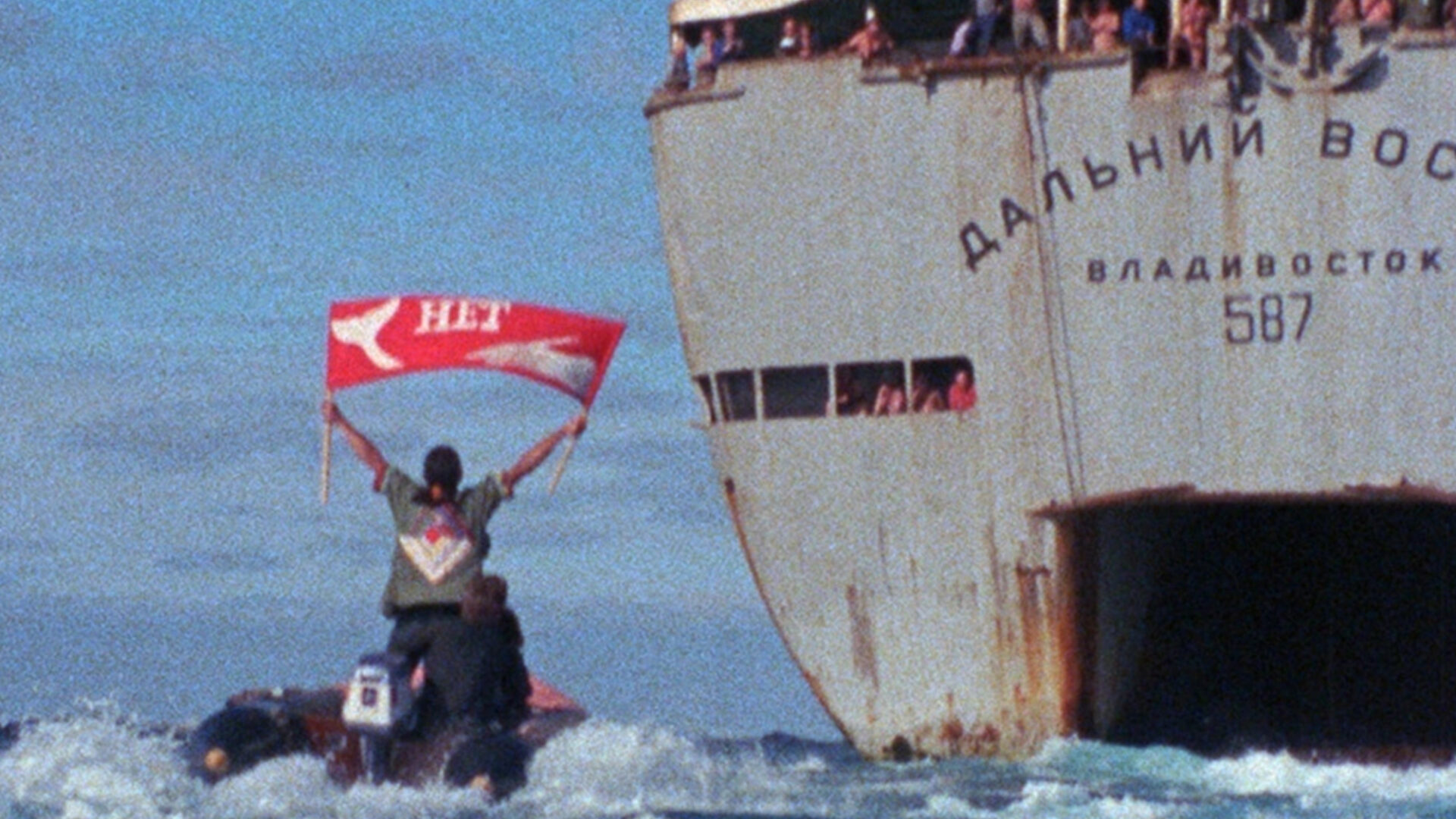 “The evening’s program shows the evolution of ecological thinking about whales over the course of the twentieth century in British Columbia, from resource extraction to ecological activism and role of Greenpeace, and from captivity or incarceration to zoological appreciation and study in the wild.” Harry Killas

Greenpeace, the influential global environmental organization, was founded in Vancouver in 1971. Greenpeace’s first campaigns to halt the hunting of whales, targeting the Soviet whaling fleet, were launched from the Vancouver docks in the mid 1970s, and are the subject of this 1977 documentary, which includes dramatic footage of activists putting themselves in harm’s way during the missions. The film won the 1977 Canadian Film Award for short documentary. Co-director Michael Chechik, now president of Vancouver-based Omnifilm Entertainment, began his long career in the local film and television industry with the kamikaze activist filmmaking on display here. With David Attenborough.

“An early documentary from many pioneering filmmakers in the non-studio independent film scene in Vancouver, and a time capsule of the early days of Greenpeace.” Harry Killas

A. D. ​“Cowboy” Kean, one of Vancouver’s pioneering filmmakers, documented commercial whaling on Canada’s west coast in this early silent short. Much of the spectacle will strike contemporary viewers as gruesome; the full title of Kean’s film, ironically, was Whaling: British Columbia’s Least Known and Most Romantic Industry. A decade later Kean became the first British Columbian to direct a feature film, 1927’s now-lost Policing the Plains. Courtesy of the Ernest Belton Collection, Library and Archives Canada.

“A shattering depiction of the industrial destruction of whales in B.C. The film carries an almost ethnographic charge in its representation of the carnage, and also suggests themes of colonization and White supremacy.” Harry Killas

“This film joins five of the world’s leading whale researchers on a scientific expedition around Canada’s Vancouver Island. Spectacular photography and sound recording, both above and under water, provide an intimate look at killer, gray, and humpback whales, and the world they inhabit. Island of Whales examines the communication, habitat, food supply, and behaviour of whales. What emerges is a picture of creatures more sophisticated and complex than ever before imagined. At the end of the film, we are left with one compelling question: Can these magnificent creatures survive in the face of declining food supplies and pollution? Narrated by Gregory Peck” (National Film Board of Canada).

“A classic B.C. film, with a charming travelogue structure, from the beginnings of new scientific exploration and appreciation of ​‘whale consciousness.’” Harry Killas

The birth of a beluga whale at the Vancouver Aquarium is the subject of this 1978 NFB short made by noted Vancouver photographer, cinematographer, and director Tony Westman.

“A captivating gem, deceptively deep in addressing the complexities around whales in captivity, an issue that became a cause celebre in the decades to follow. Like Whaling, it can be ​‘read’ through the prisms of visual art, an open system of narratives and interpretations prompted by film’s images and visual language. I love this film.” Harry Killas

Guests in attendance: Tony Westman, director of Beluga Baby. Introduction by Linda Nowlan, Senior Director of the Sustainability Hub at UBC, environmental lawyer, and Adjunct Professor at the Allard School of Law. Ms. Nowlan’s areas of expertise include marine mammal protection and the legal rights of whales.