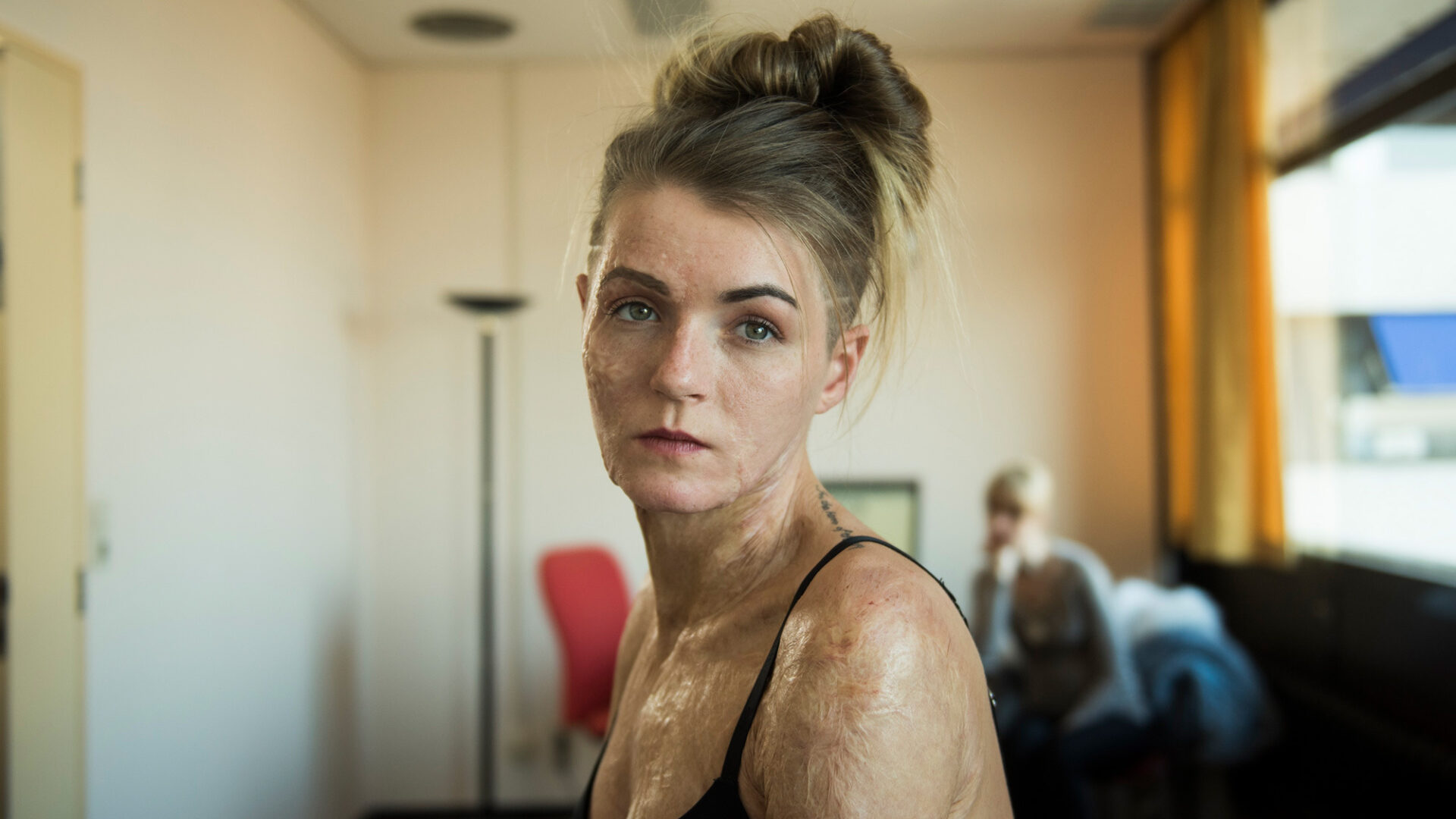 “An unflinching exploration of beauty, identity, sex, and self in the wake of a life-changing event … Knight brings a raw vulnerability that Polak captures with a clear-eyed respect and intimacy.”

Vancouver Première! The opening film of last year’s IFF Rotterdam, and screened in the main competition at Sundance (the first Dutch film to do so), Sacha Polak’s English-language debut is a revelation. Dirty God begins in the burn unit of a London Hospital, as Jade (astonishing newcomer Vicky Knight), a young single mom, is released after months of recuperation from the effects of an acid attack by her ex-boyfriend. Returning to the Hackney council estate flat she shares with her mother, Jade is greeted with tears and screams of ​“monster” by her two-year-old daughter. So begins Jade’s journey, as she struggles to reconcile her outward appearance with her desperate desire for things to return to the way they once were. In her dramatic debut, Knight, herself badly burned in a fire at age eight, brings an intensity and flinty stoicism informed by personal experience to the lead role.

Virtual access to a film is provided for seven days, at the conclusion of which we present an online seminar featuring conversations with special guests and an audience Q&A via Zoom.

Free Live Q&A
December 14th (Monday) 7:00 pm – 8:30 pm PST Purchase a ticket to watch the film and receive an invite to a free live Zoom Q&A with Dr. Stephen Anderson and Dr. Anthony Papp from the BC Professional Firefighters’ Provincial Burn Unit at VGH; Alim Somji and Anita Zvonar, two Canadians with lived experience of facial differences who are working and thriving in their communities; and Dr. Nicolas Bergeron, a psychiatrist at the Centre hospitalier de l’Université de Montréal (CHUM) with particular expertise in trauma stemming from his liaison role at the Montréal Burn Centre.

To stream this film & attend the Q&A:
Click on the ​“Stream” button above.
This will take you to the distributor website, where you can pre-order the film.
Purchase a virtual ticket for $7.99 USD (plus tax).
The film will be available to stream December 8 – 14.
You will also receive a link to the live Zoom Q&A on December 14.
This film is only available to watch in Canada.

“An extraordinarily intimate and closely focused character study. In a frank but sensitive way, Polak delves into areas that most other filmmakers would be far too timid to go near.”

Dr. Stephen Anderson has been the psychiatrist for the BC Professional Firefighters' Provincial Burn Unit at Vancouver General Hospital for over twenty years, and is also a Clinical Professor in the UBC Faculty of Medicine Department of Psychiatry.

Dr. Anthony Papp is a Royal College board certified plastic surgeon and the Medical Director for the BC Professional Firefighters' Burn Unit at VGH. He received his medical training in Finland before moving to Canada in 2007.

Alim Somji, a graduate of the Ivey School of Business at the University of Western Ontario, is based in Edmonton, where he is the Executive Vice President of the Jaffer Group. He was born with a lymphangioma on his right cheek and suffered facial paralysis from a failed surgery at 9 months old.

Anita Zvonar is a graduate of Ryerson University’s Image Arts Program and a professional photographer based in Toronto. At age 18, Anita suffered a severe car accident, resulting in years of reconstructive plastic surgery. She is a longtime volunteer with AboutFace, a charity supporting those with facial differences.

Dr. Nicolas Bergeron, MD, FRCPC, is a psychiatrist at the Centre hospitalier de l’Université de Montréal (CHUM) and an Assistant Professor at the University of Montreal since 2002. He specializes in psychiatric care of the medically ill with particular expertise in trauma stemming from his liaison role at the Montreal Burn Centre and his humanitarian work.