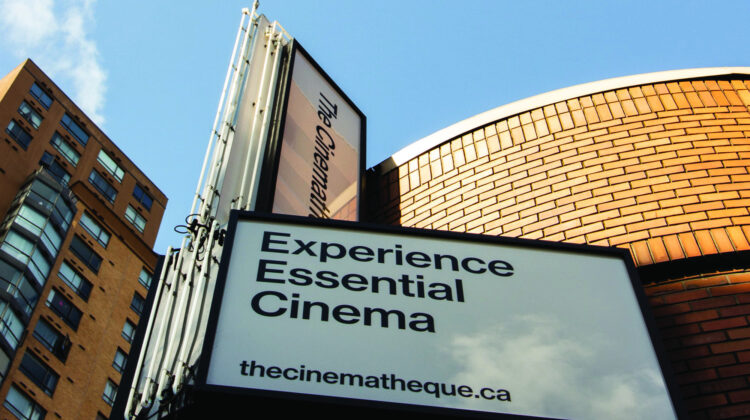 On the eve of any significant anniversary, it is natural to reflect back and think ​“how the heck did I, you, all of us, get here?”

The Cinematheque turns 50 this year, so let’s return to 1972 and what cinema and the city were like at the time. I was only four years old, so not really paying much attention, but other folks were busily causing a ruckus, creating a community, and carving out a place for film as distinct as the city itself.

Like a wandering tribe, the early days of The Cinematheque offered screenings in different locations around town. Vancouver was still finding itself, moving out of the boxy era of the 1950s and early ​’60s and into the far more freewheeling, freaky-deaky 1970s. From this throbbing moment emerged a film culture informed by the local, the avant-garde, the experimental. Whatever you want to call it, it was unique to this place and it needed a home. It found one in The Cinematheque.

In 1986, The Cinematheque moved into its current location at 1131 Howe Street. The Cine Centre, as it was then called, was ​“Canada’s first cultural centre dedicated to the cinematic arts to house under one roof production and distribution facilities for independent filmmakers and exhibition facilities for the community at large.”

The large community crowded in and things kicked off with a bang. On March 28, 1986, at the end of a panel on experimental cinema, filmmaker Al Razutis took a can of spray paint and wrote across the brand-new theatre wall, ​“Avant-garde spits in the face of institutional art.”

It was a fitting start. Part cri de coeur, part rebel yell, all dusted off with a bit of creative destruction, in keeping with the city in the go-go ​’80s.

Vancouver was a pretty different place back then. Movie houses, rep theatres, and art house cinemas were everywhere. This was an era when people had film programs taped to the front of their fridge, the better to see what was playing. In the pre-internet times, if you wanted to see a film or two, you had to plan it out in advance. Call your friends, agree to meet at a certain location, and then somehow get the details mixed up and miss them.

The Cinematheque was in the centre of all the action.

I don’t even want to hazard a guess at how many films have been screened here lo these many years. I can’t count that high anyway. Pretty much every piece of auteur-driven cinema that walks, stalks, and talks has graced The Cinematheque screen at one time or another.

Everyone has their own unique and individual collection of memorable moments—whether they were happening onscreen or in the audience. The first time I ever saw Juzo Itami’s legendary noodle western Tampopo, I remember it through a haze of horniness and hunger.

Even now, many decades after, the pungency and immediacy of that first viewing clings like a fading perfume. These experiences are like a brand upon the brain, seared deep into the meat of one’s mind, the specificity of time and place spilling out as vivid as the smell of popcorn, even on the hundredth viewing of a film.

While other theatres closed their doors and turned out the lights, The Cinematheque kept on trucking.

In the lifetime of any cultural organization, 50 years is no mean feat. Films have changed. Technology has changed. The city has really changed. But The Cinematheque remains intrinsically, indisputably, itself. So, what makes this place so damn special, so Cinematheque-ian, if you will? The most immediate answers are right there, bussing you gently on the nose: the place, the programming, the people. But dig a little deeper and other things begin to emerge.

In thinking about it, I remembered Nathaniel Dorsky’s book Devotional Cinema, which makes the argument that film, like any great work of art, offers a means of stopping and reassessing both ourselves and the world at large. In one section of his book, Dorsky recounts seeing Roberto Rossellini’s film Voyage to Italy, an experience that proved so overwhelming that the audience upon leaving the theatre didn’t ignore each other but clung together like people on a life raft.

Great films can put us in touch with a greater mystery, what Dorsky describes as ​“a hidden world, one that has existed all along right in front of us … Everything is expressing itself as what it is. Everything is alive and talking to us.”

The Cinematheque has been keeping the faith with this greater world since the very beginning. The faith that people will always seek out films that contain the harder kernels of life. That, however many times the death knell of cinema has been sounded, it will prevail, championed by a core contingent of dedicated people. In this aspect, The Cinematheque feels even more necessary and more critical than ever. It isn’t about corporate profits or the demands of a consumerist market-driven economy, all the stuff that turned movies into widgets. It’s about something else. That pesky old thing that we like to call art.

Like life, film is a time-based medium. What Louis Malle once described as ​“Time’s tamer. Time’s slave.” It is interesting to return to films that marked you. When I think back over the years of film at The Cinematheque, certain experiences resound—Phantom India, Malle’s six-hour masterwork; the cheeky nastiness of ​“The Cinema of Cruelty”; the retrospective of director Kelly Reichardt; and those are only the first few to come tumbling out the memory bank.

All the moments that make up the length and breadth of our lives are tangled up with the films that mirrored them, created them, enshrined them. Or as Stanley Cavell so gracefully put it: ​“Movies are strand over strand with memories of my life.”

There’s a reason that people still go to a theatre to see films with other people. The spirit of community is alive and present in the lobby of The Cinematheque—people arguing, meeting friends, folks running to the bathroom before the film starts. All of it as necessary as air and water. Call it old school, this insistence that people need a place to come together. Audiences will change, seats will get upgraded, and more snacks will hopefully be offered. (Please, never, ever get rid of the nutritional yeast for popcorn!)

Whether it’s taking your kid to see their first Studio Ghibli film or a Hitchcock movie on a sweltering summer night—a theatre becomes a kind of home for people. The same faces popping up again and again. It’s a place of refuge, a sanctuary, a church of sorts.

When I was younger, I would often go to the movies by myself, arriving at least 20 minutes early to sit in the twilight of the theatre, wrapped inside the crepuscular darkness, waiting for the film to start. It was a form of personal ritual that ended, at least, in mainstream theatres when the barrage of ads and pre-show stuff killed the quietude permanently.

It is still quiet in The Cinematheque with people shuffling in, balancing bags of popcorn with different flavoured topping, drinks, and candy, taking their place in their favourite seats and participating in an ancient Platonic rite of watching shadows on a wall, something that we humans have been doing since our earliest days.

The lights go down, the silver screen stirs to life, and inside this shared moment in the movie theatre, we come together, a funny little world of film-loving humans.

Dorothy Woodend is the culture editor for The Tyee and the former director of programming for DOXA Documentary Film Festival. In 2020, she was awarded the Max Wyman Award for Critical Writing. She won the Silver Medal for Best Column at the Digital Publishing Awards in 2019 and 2020, and her work was nominated for a National Magazine Award for Best Column in 2020 and 2021. Woodend is a member of the Broadcast Film Critics Association and the Vancouver Film Critics Circle.