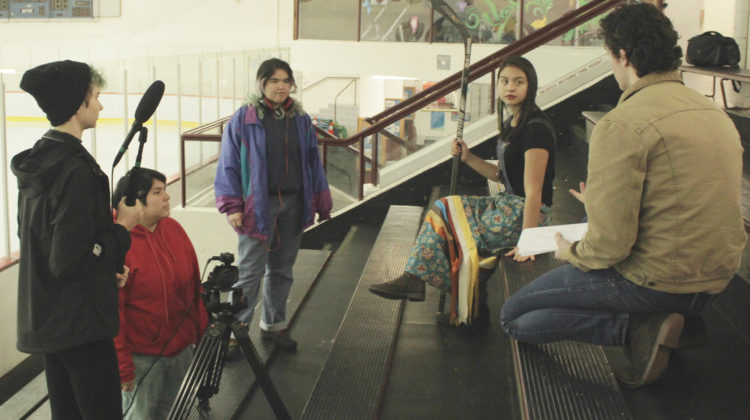 Reaching Out was a project that empowered young activists in Gender and Sexuality Alliances (GSAs) to produce and share high-quality videos aimed at making change and building networks of Allies within their local communities. Provided with mentorship from professional filmmakers from The Cinematheque and educators from Out on Screen, during the 2017–18 and 2018–19 school years youth from Vancouver, Coquitlam, and Burnaby GSAs created short films and learn strategies to impact thousands of youth across the Lower Mainland.

Each district worked with Cinematheque staff to organize and host a video intensive in which three of their GSAs came together for five days of learning, collaborating, and mentored filmmaking. Participating GSAs created innovative videos that tackled an emerging issue in their school, or share an inspiring story with an anti-transphobia message. Out on Screen facilitators provided expertise in effective communication strategies for these topics, while Cinematheque filmmakers provided youth with video equipment and conceptual development, scriptwriting, camera, sound, and editing workshops.

30 students from 3 School Districts (Vancouver, Coquitlam, Burnaby) created 9 unique, compelling, and thought provoking videos. The students were supported by 6 school staff that assisted with the logistics of the program. 8 video facilitators from the Cinematheque and 4 facilitators from Out In Schools supported the students in the creation of the videos. Another 12 students did bit parts or extras roles. 58 people were then directly involved in this program. Once created, the videos were screened at 2 locations during the Vancouver Queer Festival, and also at a special event organized at the Cinematheque: in total, almost 400 people saw the videos during these three events.

The quality of content of these videos is attested by the extensive way in which educators have been using them: the videos were screened during the Diversity Forum (School District of Vancouver), and at the annual IDAHAT (International Day against Homophobia & Transphobia – Burnaby). Furthermore, educators in all the three School Districts (Vancouver, Coquitlam, Burnaby) planned to show the videos when delivering SOGI (Sexual Orientation and Gender Identity) education workshops to both staff and students.

The impact of these videos in the community goes well beyond these already great results. Every student learned communication skills that will make a difference in the next steps of their studies. Several students reported how this was a key opportunity for them to meet with other students with similar life experience. Discussing, sharing, and designing videos that portray their stories was a powerful moment of self-reflection. Seeing their stories screened in prestigious events was an empowering experience, which has affected the self-esteem of the youth. The students’ friends, families, and teachers have also been affected by this program: the learning and life ecosystem within which the students live have been altered, as the students have developed new relationships, while claiming authorship of their life narrative.

Watch all the films here.

The project was supported by Coast Capital Savings and Telus Vancouver Community Board.